If you know me very well then you know that I am actually very shy. I hate big crowded events and I hate meeting people I don’t know. Sometimes I hate talking to people, period. As I’ve aged, I have somewhat managed to overcome my shyness by feeling the fear and doing it anyway. Yes I still get anxious, but I have learned that I enjoy genuinely connecting with people. I just need to give myself a chance!

This weekend I stepped way out of my comfort zone by attending my very first fitness conference, ACE Symposium East 2013 in Orlando, Florida. And of course, it was well worth it! 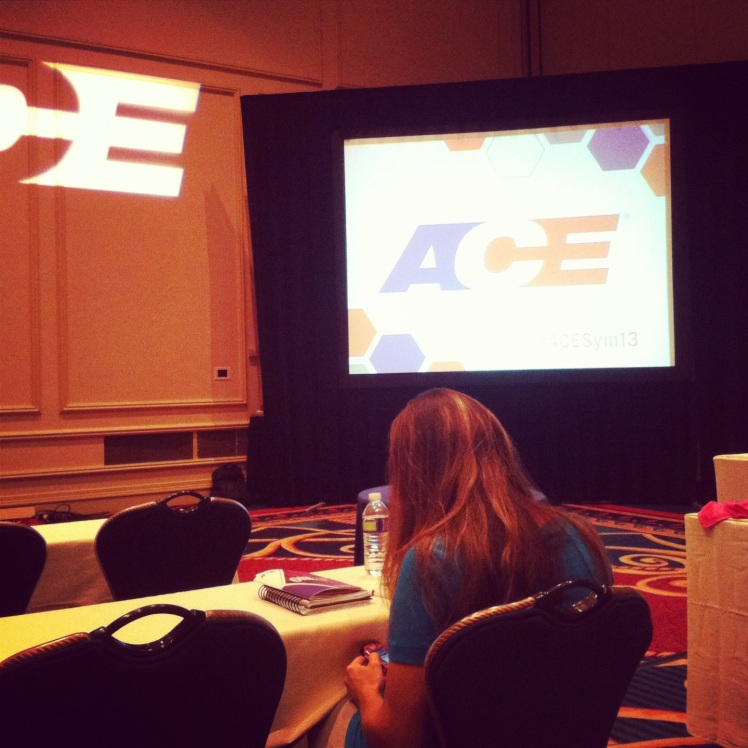 The weekend was jam-packed with learning, movement, inspiration and special encounters. Although I was nervous for about a week before the conference even began, I immediately felt at ease and full of excitement by the time the keynote speaker, Bryan Clay also known as the “World’s Greatest Athlete”, took the stage.

Bryan shared his story as troubled young man in Hawaii who eventually found the focus to become an Olympic champion in the decathlon. His point that “It’s about the process, it’s not about the outcome” really struck home. What an inspiration! 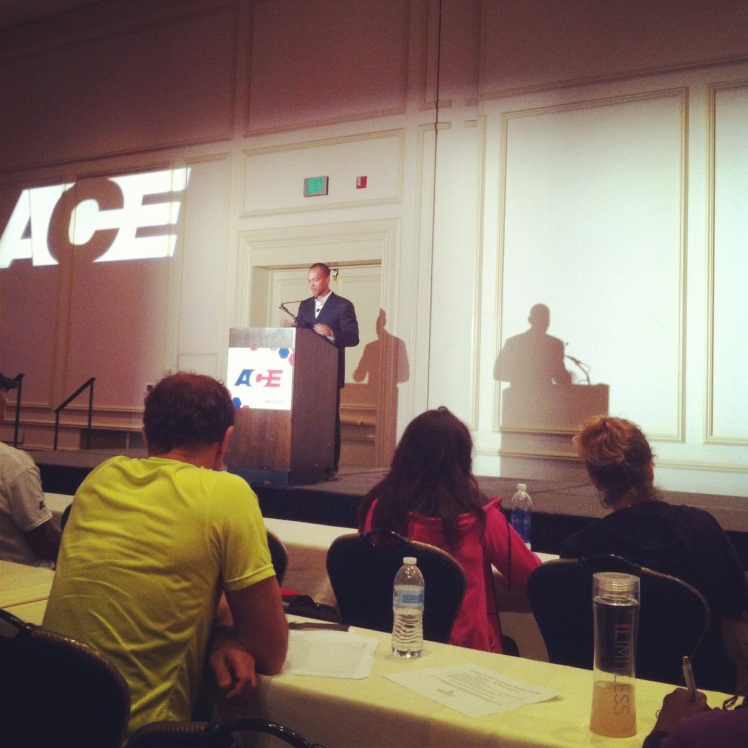 On the first day of the conference I enjoyed learning about personal branding from Antonio Williams, PhD and then had my butt kicked by the incredible Chris Freytag in an hour long HIIT class using Tabata circuits. By the end of the workout my muscles were exhausted and my face was bright red. But you know what? It felt good!

Chris Freytag also taught an amazing class the next day on Building Your Brand for Success in the Fitness Industry. She gave me a lot of great ideas for the direction of this blog and my social media presence. Big changes are coming soon! (Don’t I always say that?? Haha)

After class I met the lovely Purely Twins, Lori and Michelle! I was so excited to meet them and visit the Raw Threads booth where I bought two awesome workout tanks. One says “I Lift Heavy Things” on the front and I am obsessed. Lori and Michelle were so nice and welcoming and I was thrilled to have met some of my favorite bloggers.

In the afternoon, I attended an amazing session on Structural Assessment into Movement Analysis by Justin Price. He took us through various movement assessments to find imbalances in the body which can cause injury. He also taught a class the next day on Using Strategic SMR Strategies to Improve Function. Using the Structural Assessments, we learned how to use a tennis ball to target tight muscles and fascia. The solution to imbalances in the body is SMR, Stretch and Strengthen!

Funny story, in class I found myself sitting next to another Kirsten! At the end of class, Justin did a raffle for one of his IDEA Conference videos and he announced “Kirsten Chmaseirjaosdjfl….”, butchering the last name. The other Kirsten jumped out of her seat and yelled “That’s me!” Then he said ok “Kirsten Chmielewski” and I stood up and said “Uh, actually that’s me.” Whoops…. but I won!!! Hooray! Can’t wait to watch this video on addressing shoulder pain.

In the afternoon I was inspired and motivated by Bill Parisi during his lecture on Becoming a Legendary Youth Performance Coach. In Shanghai, I plan on working with some international schools and now I have more confidence to do it! Bill stressed we should be positive role models in a negative world and that we need to use fun ways to convince kids that anything is possible. I love this mind-set!

Then Jonathan Ross, who is a total badass, taught a great workshop on Plyometrics for Everyone. I ended up partnering with this awesome 70 yr. old man from Alaska who is crazy fit! He was really fun to work with and so inspirational! Now I have a lot more moves in my arsenal for challenging clients… get ready. 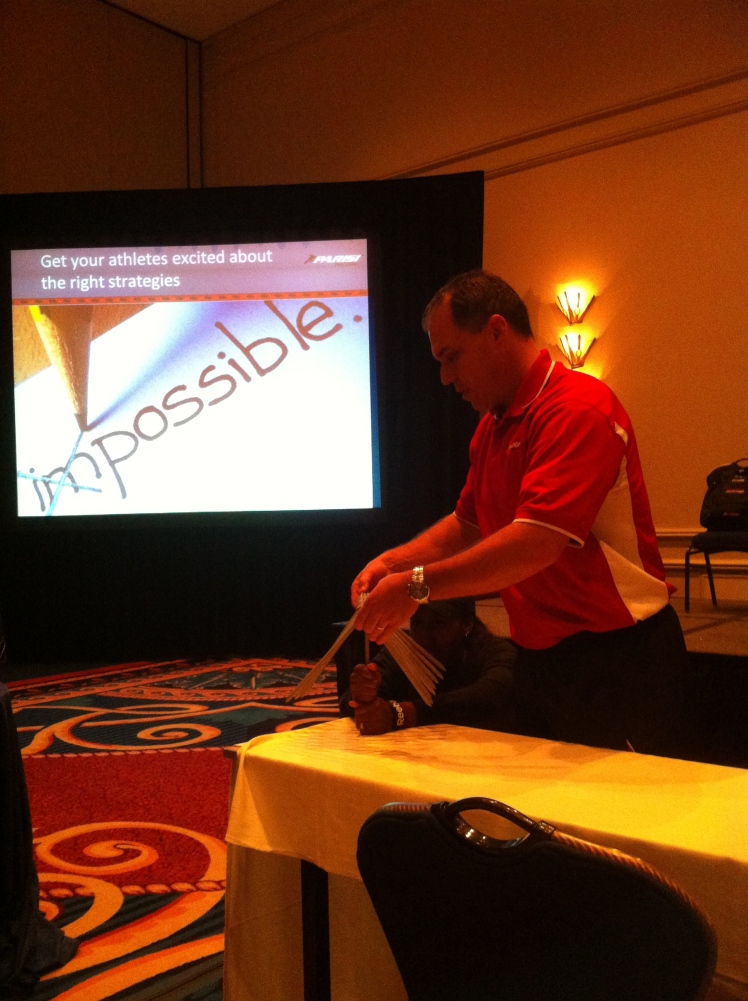 That evening I got my butt kicked in a Step360 CORE class that had me shaking like a crazy person. Dear lord, it was awesome. After class I quickly drove back to Carina’s so we could attend her school’s Fall Festival! Her students are so adorable and did some great performances. Even Cher, Katy Perry and Lady Gaga showed up. For realz.

On the last day of the conference (sad face), keynote speaker Wojteck Chodzko-Zajko gave an incredible speech on healthy aging and public policy. First of all, this man is extremely attractive for an older man. I was a fan. Second of all, he shared incredible stories of his time on the United Nations and his mission to create public policy for a successful aging population. This is the future of fitness!

My mind was further blown by SHAKTI: The Experience taught by the incredible Lawrence Biscontini who is now my favorite group instructor in the world. He is motivating, hilarious and absolutely fabulous. Lawrence created a class combining mind-body practices such as yoga, pilates and tai chi and rolled it all up into an uplifting and magical experience… all with non-verbal cues. Yup. He does not speak at all! But he did have the most incredible playlist including Josh Groban, Broadway musicals, the Downton Abbey theme song and “Taylor the Latte Boy” by Kristin Chenoweth (during which he donned a Starbucks apron). Amazing!! I loved the combination of all mind-body practices and especially fell in love with the soothing tai chi movements.

Basically I fell in love with both Lawrence and SHAKTI and felt invigorated for days. Heck I am still talking about SHAKTI today! Lawrence, can you please stay in Florida?? Please?? We can drink all the lattes you want.

Also do you like my outfit? Raw Threads baby. Hey look at that body… I WORK OUT. 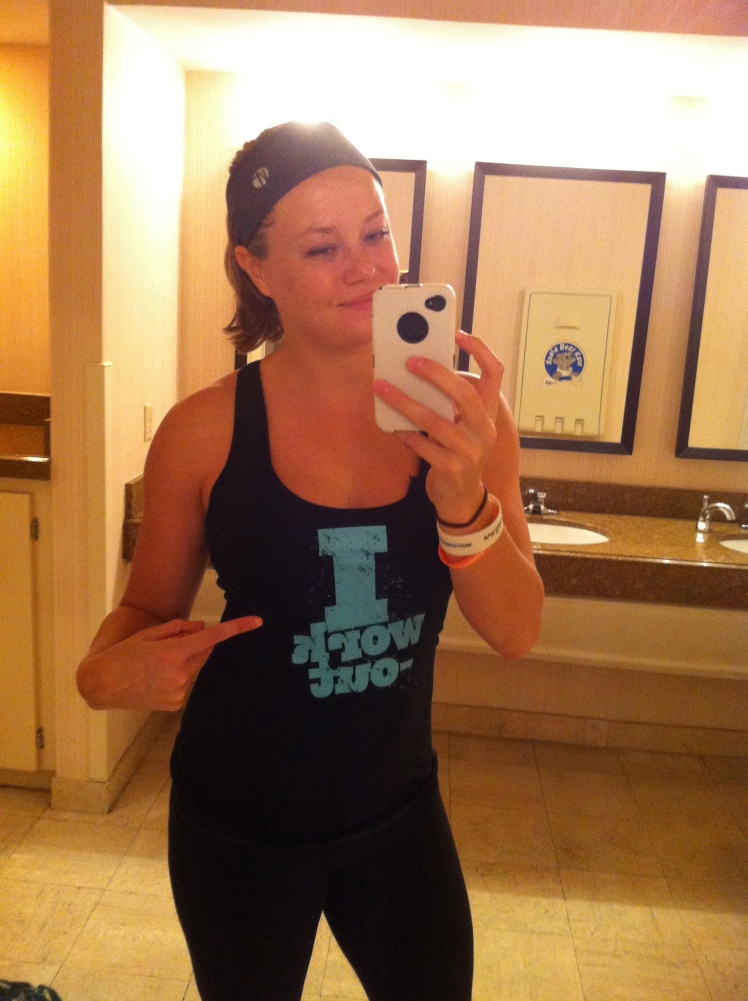 I also eat burrito bowls as big as my face. This was lunch post-SHAKTI. All workouts deserve Mexican food with lots of guacamole. You can’t forget the guac!

So when I first started studying for my ACE Personal Training Certification, I started watching some ACE training videos led by the beautiful Jessica Matthews. Well on the second day of the conference I happened to notice her across the room and freaked out! Jessica was here??? I made it my goal to meet her. Well she took SHAKTI too and I finally got to meet her after lunch. I said, “Omg you are Jessica from the ACE videos!” And she goes, “Are you the Kirsten from Twitter?” Yeah it was pretty awesome. She was so sweet in person and so short! In this picture I am bending my knees and she is on her toes! So funny.

@FitExpertJess I agree! Shakti with @findlawrence was an incredible experience. I'd say the highlight of #ACEsym13

I had been tweeting about #ACESYM13 all weekend and of course tweeted about loving SHAKTI. Well I got a tweet back from @AceFitness saying I had won best tweet of the conference and that I had won a prize! Yippie!! I walked away with a sweet pair of Bose headphones that are amazing. They put my Apple earbuds to shame. Thanks ACE! I really enjoyed tweeting! 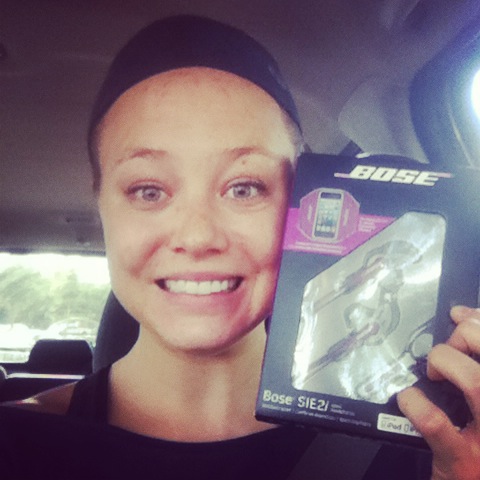 I don’t know how, but that night Carina and I went to downtown Orlando for some Thai food, Chang beer and drinks at The Woods. Have you tried Chang beer? It is a delicious Thai beer that we tried in Chiang Mai. We were so excited to see it on the menu! Also, if you have the chance go to The Woods in Orlando. It was a really chill craft bar with a brilliant forest decor featuring lots of wood and antique knickknacks. They also have some delicious cocktails made with their own cinnamon infused whiskey. Oh yes. It was a long night…

By Sunday morning I don’t even know how I was alive and kicking. The conference and that late night definitely wiped me out. So what’s the solution? Pumpkin waffles!!!! Ooo baby! So good. Later I tried my first Bikram yoga class…. uh hated it. No thank you.

Despite that terrible Bikram class, I had an incredible time in Orlando at ACE Symposium EAST. I was still riding an emotional high even after the conference ended! ACE Symposium was an incredible 3 days and I will never forget it. I am so inspired now to take my training to the next level and incorporate all this new information into my health coaching practice. Ultimately my goal is to turn this blog into a resource for health, fitness and travel as I continue coaching clients from around the world. I am excited!