Thanksgiving is my second favorite holiday, after Christmas of course. My family has the wonderful tradition of escaping to a cabin in North Carolina with 2 other families and we eat, drink and be merry. That’s exactly what we did 2 Thanksgivings ago. Now that all of the kids are adults, it has become increasingly difficult to get everyone together. Last year I was in Shanghai celebrating with a bunch of Scots and Americans. That was interesting.

Thankfully, this year the stars aligned and I am home for the entire holiday season! After learning that we are not moving to Shanghai until the new year, I was immediately thrilled that I would be making our annual trip to Lake Lure. But before we got there, we had a few problems along the way…

On the Tuesday before Thanksgiving, our first flight was cancelled due to a storm moving into the area. At the last minute, some of the kids and I managed to book an Allegiant flight to Greenville, SC. Because we were so rushed, we barely made it to the gate on time. Amazingly, all five of us got seats together and we settled in for a quick hour-long flight. Well, 45 minutes into the flight the captain comes on the intercom and informs us that a flight attendant is sick and we are headed back to St. Pete. What?? We thought that maybe a pilot had died or something crazy. 45 minutes later we landed back in St. Pete and were greeted by ambulances, fire trucks and police cars. They did not allow us to get off the plane so we just sat and tried to understand what was going on.

Later we realized that there must have been a legal issue since the sheriff was there. But really, who the heck knows?? After an hour of waiting around, we were cleared to fly and took off towards Greenville again. By this time, the dads were waiting at the airport for hours to drive us to the cabin. So instead they reserved a cab for us since it was getting dark. We finally landed in South Carolina at 7pm, grabbed our stuff and drove for another hour in sleet-like conditions. By 9pm we arrived!!

It was a really long day and we were just happy to be there. I travel a lot and this was by far one of the weirdest things that has happened to me on a flight. I am used to 12 hour flights but turning the plane around? That’s a first. However this sure does beat crowding on a plane full of Chinese people attempting to stuff mounds of luggage into the plane. Now that always makes me truly exasperated. I think I can handle anything (as long as I have food).

We must have brought a cold front with us because the next day it was absolutely freezing with temps in the lower 40s. Brrr!!! Because it is tradition (and because we are crazy), we piled into the pontoon boat for our annual ride on the lake. We bundled up in our parkas, scarves and mittens and buried ourselves under blankets to protect us from the wind chill. I was freezing even in my parka!

We might have been the only crazy people out on the lake but we had a great time as always. It was actually so cold that it started snowing!!! There was only a little bit of flurries but it was still pretty insane. I haven’t seen snow since New Years in Italy! 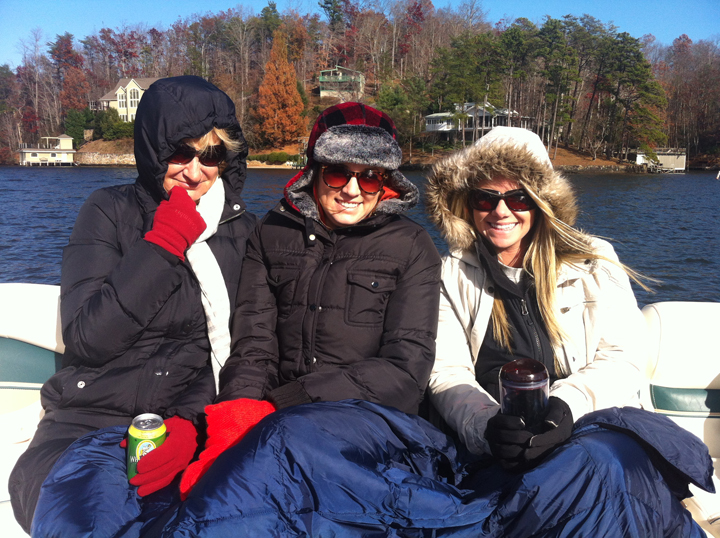 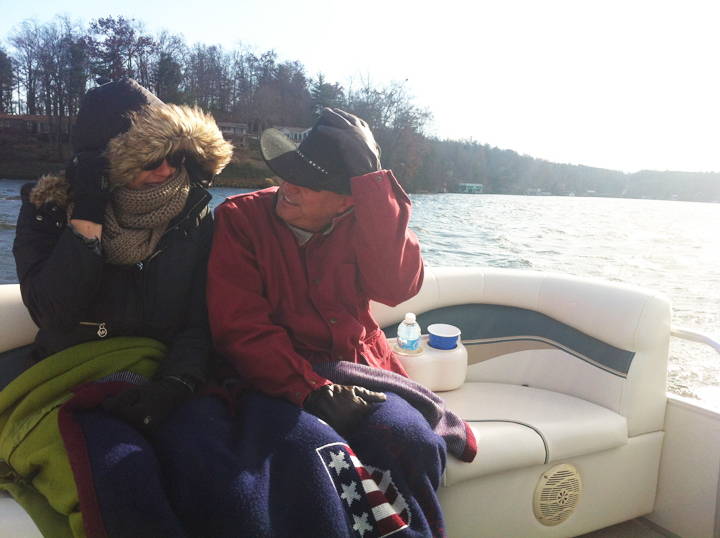 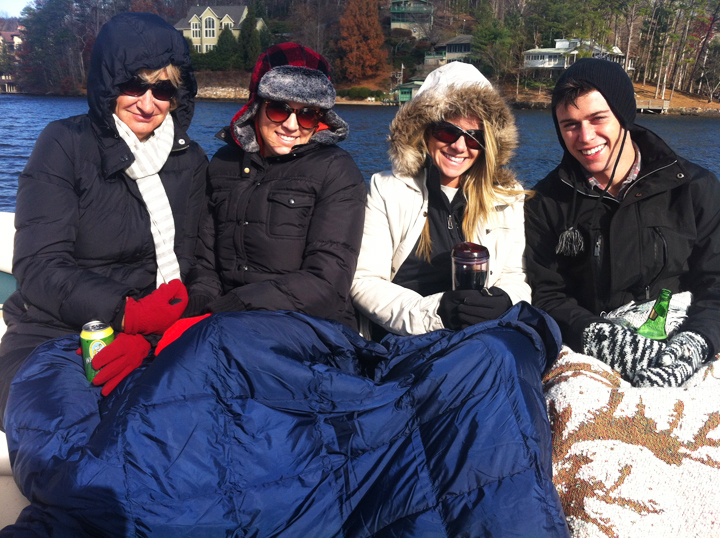 At one point it was so cold that I just laid down on top of everybody. I would highly recommend it.

While eating lunch at Larkin’s, the kids all bought matching Lake Lure shirts to represent Team Lake Lure. This is the kind of stuff we do to entertain ourselves up here.

On Thanksgiving day it was slightly less cold than the day before so we made sure to soak up some sun before chowing down. Every morning I went for a brisk walk with the dads so that also helped keep me warm (sort of). I didn’t take pictures of the food or anything but I assure you, it was delicious. We were all in turkey comas by 4 o’clock. I was glorious. My favorite dishes were probably mashed sweet potatoes and pumpkin pie. Nom nom.

The most adventurous thing we did all day was try to start a bonfire that night. However, the wood was wet so it never really got warm. That sucked. But at least we tried.

Friday was our last day so the girls and I went for a final walk around the neighborhood. It was a stunning day which made me so reluctant to leave. We only just arrived! Thanksgiving is always too short. Sometimes I feel like I can stay in an isolated cabin in the wilderness for the rest of my life. I think it’s because I have lived in some of the most crowded cities of Asia. But I also love spending unavoidable time with family and friends in a beautiful place with plenty of fresh air. It is invigorating and someday it will be my life. Some day… 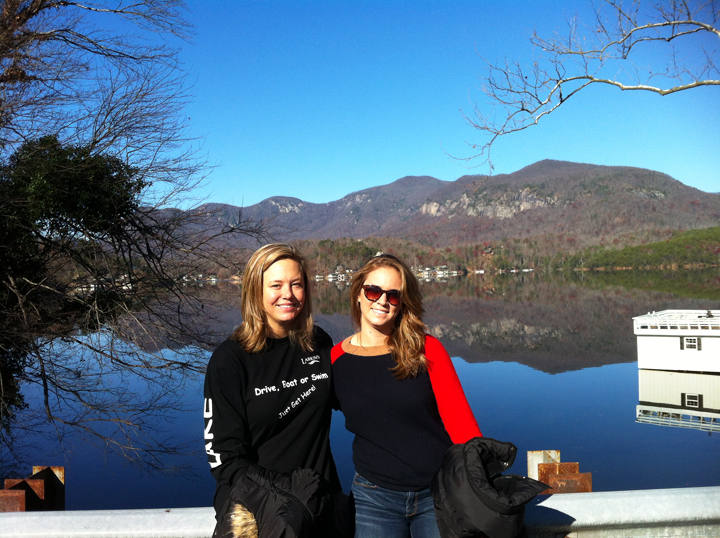 My parents drove down to Gainsville while the rest of us took a small plane down in the afternoon. I really hate flying in small planes. Let’s just say I was a little scared…

But once we landed in Florida only an hour later, I was all smiles.

In Gainsville, we stopped at our friend’s house for some UF Football pre-gaming and enjoyed yet another enormous meal including biscuits with turkey gravy. Omg. So delicious. They also had some crazy awesome cider with flavored vodka and it rocked my world. I give it a thumbs up.

With bellies full, my parents, Morgan, Mads and I drove the rest of way home. It was certainly a quick holiday with travel difficulties and only two and  half days in the mountains. But it was a perfect holiday spent with people I love. I would travel thousands of miles to keep up this family tradition.

2 thoughts on “Travel Disasters and Thanksgiving on Lake Lure”