I love Wednesdays. We don’t have class but do have day trips with our classes, if they’re scheduled. Last Wednesday was the trip to the DR station with Lost in Translation. But today, nothing. Which is great considering it snowed in the morning but then became freezing rain. I’ve been able to get my work done for next week, read, smash a mirror (is that bad luck?), and plan my long study tour. My Mom is coming to travel with me for two weeks after Prague with my class!! Yay! We are thinking of either staying in Prague longer then heading to Vienna, Salzburg, and/or Amsterdam OR taking train to Sweden, Norway, and Finland. So many possibilities. I love Europe. We shall see. Sooo….

March 7-22– Alexi visits Copenhagen!! ❤
March 22-27– Prague with my Memory and Identity class
March 27-April 11– travel with Mom somewhere, not planned yet
April 12-14– basically a booze cruise to Oslo, Norway with my host family

Tomorrow morning at 7:30AM *groan* I’m taking a bus with my Prague class to Flensburg, Germany and then to Ribe, Denmark on Friday and Saturday. Flensburg, on the German-Danish border, used to be part of Denmark but the majority of German-speaking residents voted in 1920 to become part of Germany. Ribe is in southern Jutland and is the oldest town in Denmark. We are going to the Ribe Cathedral, Viking Museum, monastery, folk highschool, and nature reserve to see birds (ornithology anyone?). I’m really excited to explore the town and check out the viking museum as well as chat with the Danish artists, musicians, and singers at the folk highschool. OH and take tons of pictures of course. Hopefully it won’t be as miserable and snowy/rainy/cold/gross as it is predicted to be.

Fun fact: Jacob Riis, the photojournalist pioneer was born in Ribe! He is famous for his book “How the Other Half Lives”, which depicts the New York city slums in the 1880s. 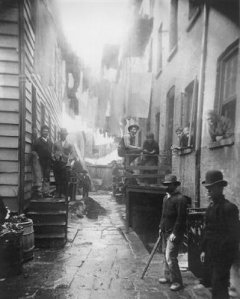 It has been claimed that he staged many of his photographs to emphasize the poverty and misery of these people. He probably did. But does that really detract from the the reality of their poor living conditions? All the same, Ribe produced a historically influential photographer. And we get to see Riis’ childhood home, oh boy! I hope Ribe is a much better experience than the NY slums.

Here’s to safe travels and to Denmark!