There are times when I’m in my apartment and I forgot that I am in China. The air conditioning is blowing, Hulu is streaming my favorite show, and I’m checking Instagram on my phone.

Then there are times when I’m in other people’s apartments and I remember exactly where I am. One of the largest cities in the world. I mean, how can I forget when you see this?

And that’s just the beginning.

Sunday we were back at Randy and Jenny’s for another round of badminton. On the cab ride over we were diverted away from a blocked street surrounded by hundreds of policemen. Protests have been popping up in the city over the China/Japan territorial dispute in the East China Sea. This just so happened to coincide with the 81st anniversary of the brutal Japanese invasion of China during WWII. The fact that China is allowing such protests shows the seriousness of the dispute.

As we drove by the protest site, we passed buses full of policemen lining the entire street and even groups of riot police.

Freaky. We checked out the details on our Japan cruise next week and found out that the cruise ship is Italian owned and US run. It is not a Chinese ship which is good. Also if there was any real concern we would be informed by the company. Honestly we are not too worried. Maybe because we are all too excited for the fresh and clean ocean breeze! Cannot wait.

After making it past the protests, we arrived at Randy and Jenny’s and played badminton for a solid 2 hours. I actually improved thanks to Peter urging me to move my feet haha. My arm has been sore for days from all this badminton! We then went up to R and J’s apartment to chill out and celebrate their daughter’s birthday. 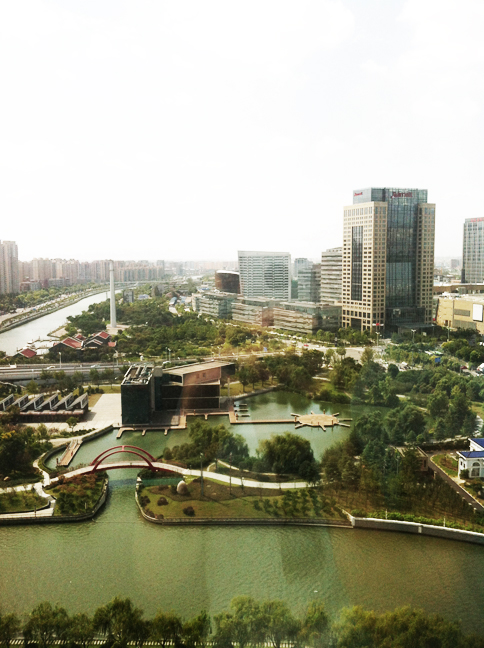 They have an amazing view of the city and the thousands of apartment buildings in Shanghai.

For Sammie’s birthday we enjoyed Subway for lunch and a homemade Chinese birthday cake. The cake was so delicious that I devoured 2 slices no problem. Next on the birthday girl’s agenda was a trip to the local mall which boasts tons of kids activities.

Somehow I end up being harnessed to a two story obstacle course complete with various ropes, balance beams, and swinging logs that you must cross. It was fun but also absolutely terrifying. Yes you are harnessed in but I did not trust the contraption to hold my weight. Nor did I feel completely safe stepping on logs connected to ropes while suspended 2 stories in the air. But I survived (along with the other 8 year olds haha) and rewarded myself with some ice cream. Yay.

We also had some fun in a crazy arcade. Of course the boys played the one game with guns (hahaha really? Rambo?).

I played some Mario Kart in one of those car simulators. Yeah it was kind of awesome. We all won enough tickets for Sammie to get a couple of toys from the prize area. Success.

We had a great day and are thankful R and J let us partake in their family activities. We all need a little family time.

Even if it’s not our actual family!