You gotta love technology. It keeps us connected. And you know what? Maybe it keeps us sane (except when people keep posting pictures of pumpkin spice lattes… not fair!) 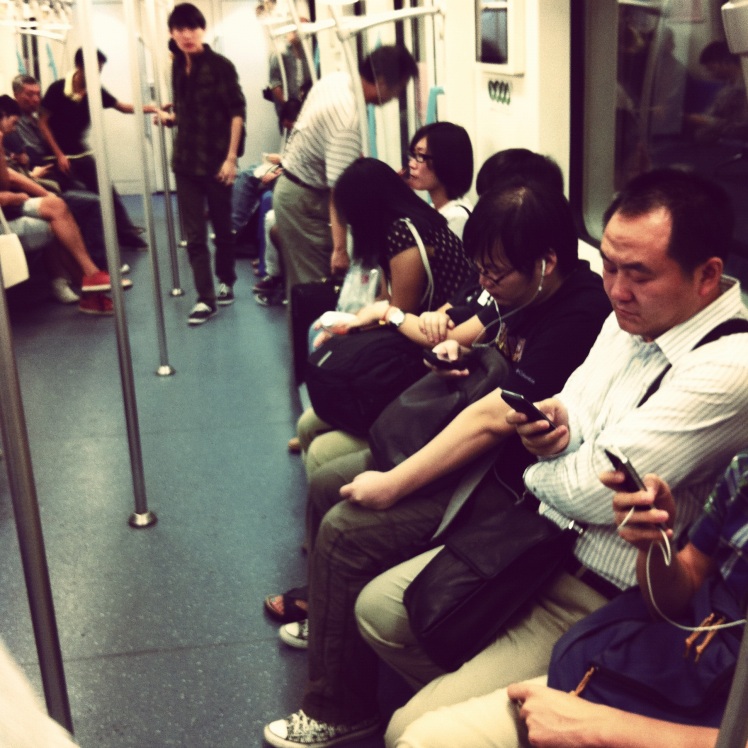 I think technology is helpful in a city like Shanghai because it distracts you from the millions of people around you. This way you can focus on your phone instead of the fact that you are sandwiched between strangers.

I prefer to stand!

So I have to tell you about the craziest thing I’ve done so far in China. I cannot believe I am still alive. Sounds crazy but it was crazy.

I rode a bicycle on the streets on Shanghai.

I was pretty positive there was no way I would ever ride a bike here. I love biking but hate dying. But Peter and I had to meet with our apartment’s front desk guy this Monday at lunchtime. Why? To register our residency with the local police.

After a lovely lunch at Subway we walk back to our building. Once we arrive, the front desk guy takes out 3 pairs of keys and Peter explains that we will be biking or something to the police station.

The guy leads us to our building’s rec room where 3 bicycles await. I start muttering curse words while mounting a bicycle fit for a short Chinese person. Sitting on the ridiculously low seat, my knees jut up to my elbows and I suddenly wish I hadn’t worn tight jeans and sandals.

But it’s too late now.

The guy starts pedaling down the street and we follow, shaky but giddy with adrenaline. We turn into the side bike lane along with other cars, motorcycles, and people zigzagging through the streets with little attention to traffic stops and street lanes. I’m more afraid that people will get into an accident staring at the two white people on bikes. However people seem to drive surprisingly well with heads turned and mouths agape.

10 minutes later we amazingly arrive at the police station. And you know what? The ride wasn’t too bad at all. It was almost enjoyable. A couple of times I forced myself to snap out of my bike riding revelry and remember that I was in fact riding a small ghetto bike with no helmut or proper footwear in the streets of China. That helped me focus despite the creaking sounds emanating from Peter’s laughably small bicycle.

At the police station we’re forced to wait while a stern police woman processes our passports. Or something. Who know’s what she is actually doing for 20 minutes. But we get to witness a lovely interrogation going on in the room across from us. There’s yelling, screaming, and banging sounds coming from the room and it’s just a little terrifying. However the front desk guy tells me that I look like a certain movie star and I feel a little better.

After waiting for a while they inform us that the machine they are using to do whatever it is that they are doing just broke and we have to come back later to pick up our passports.

So we bike back to the apartment safe and sound with sweat of fear and exertion pouring down my back.

But we survived. And we can use those bikes whenever we want! Oh joy, the perks of a Living Flat.