Wow, my ears are still slightly muffled from the Aerosmith concert last night. I will talk about that soon! But first I am looking forward to posting about Peter’s birthday weekend in Shanghai. We had a blast and have some great pictures to prove it! Enjoy.

After celebrating Barri’s birthday on Thursday, we were excited to celebrate Peter’s birthday that weekend! Peter wouldn’t turn 25 until Monday the 19th so we had a jam-packed Saturday planned.

First up was Mr. Pancake House in Jing ‘An for brunch. 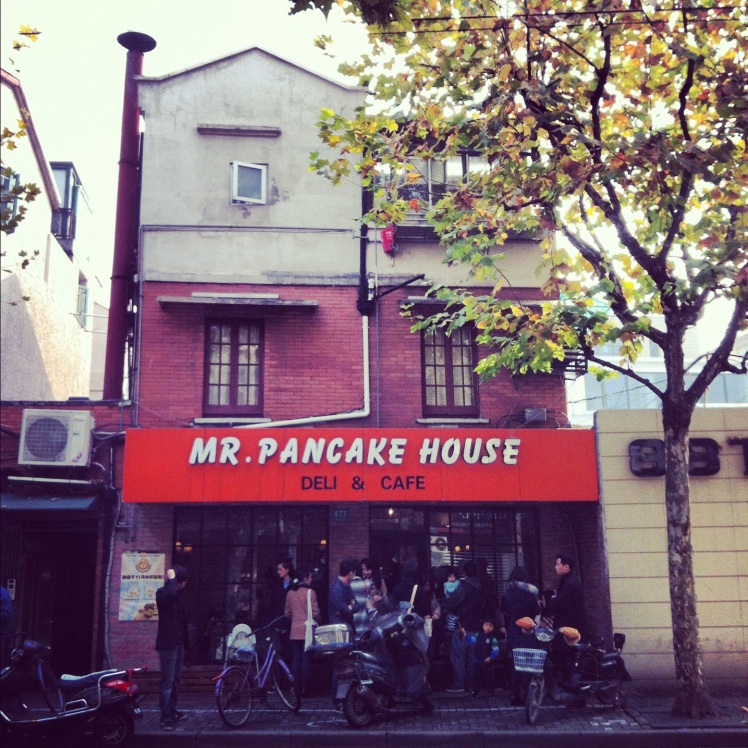 At noon, the restaurant was completely packed so our group of 8 ended up waiting for more than an hour before being seated. But it was totally worth it. I mean check out these pancakes: 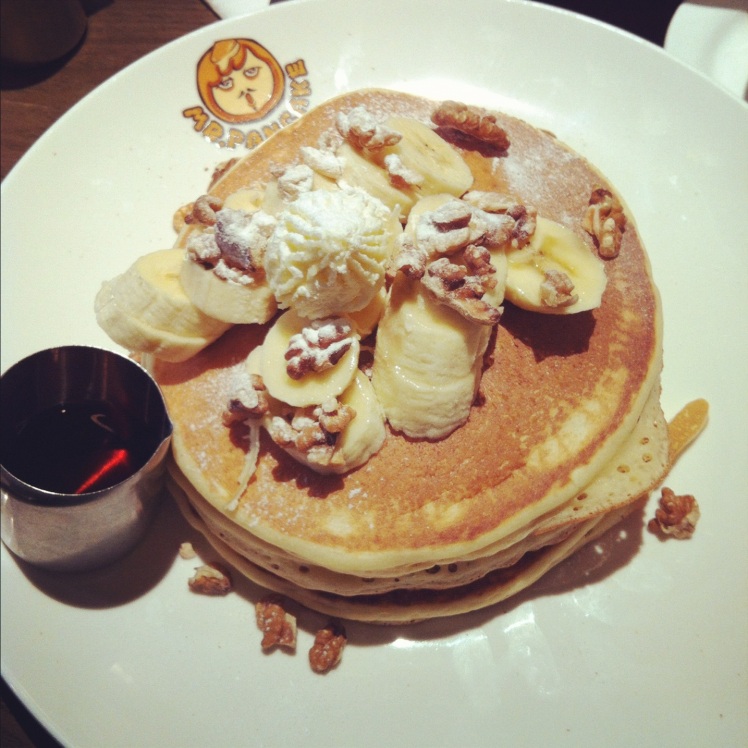 Yum! We also ordered some nutella crepes that were ridiculously amazing. The portions were so large that the plates barely fit on the table. Of course we stuffed ourselves to the brim with as many pancakes as we could muster. Peter was in pancake heaven.

After the rest of our group went home, Peter and I decided to walk around and explore the area (and digest). My Crossfit gym is in the same area and I planned on attending open gym in a couple of hours. Fall weather had finally arrived so the air was brisk and chilly. We bundled ourselves in the cold while weaving through the neighborhood and discovering unique shops and restaurants.

We also found some kittens! They were playing rambunctiously, rolling around, jumping on each other, and chasing each other around a shop. It was the cutest thing ever. We stopped and watched them for a while, laughing at their adorable antics.

We also stumbled upon a familiar place… the Jade Buddha Temple! Remember when we visited during my last trip to Shanghai in March? We were shocked to discover that it was located on the same block as my Crossfit gym! I had no idea! Sometimes this city feels so big but is really very small. 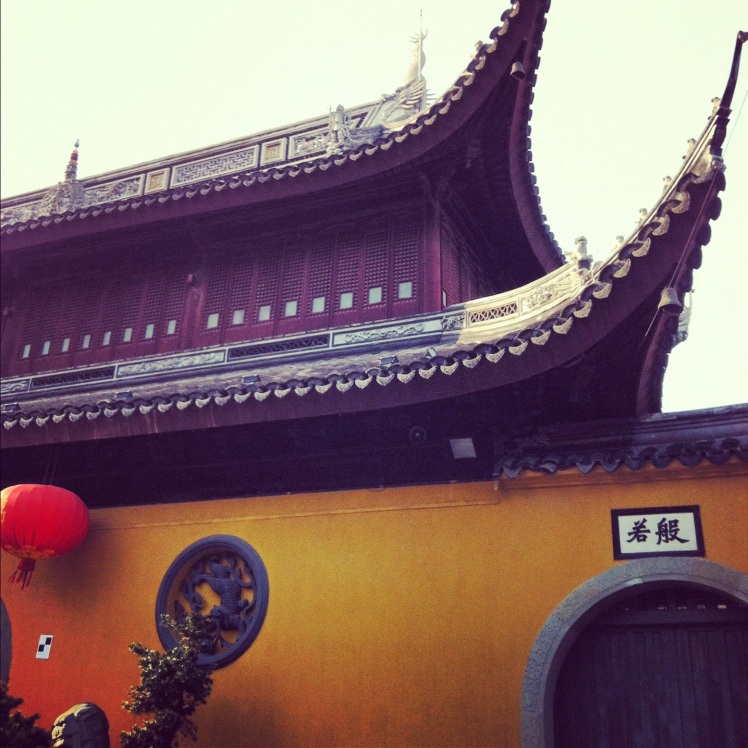 Then it was open gym time. Peter headed home while I walked just a few blocks over. I was excited to workout and get warm! To start, I worked on my back squat. There were a couple guys in the weight room doing crazy powerlifting and their presence made me really nervous and timid. My squat form sucks and I knew they would be judging. Ugh. But I managed 5 sets of 5 with 50kg or 110 lbs. Take that boys!

Then I chose a WOD written on the mirror from another day and got to work. 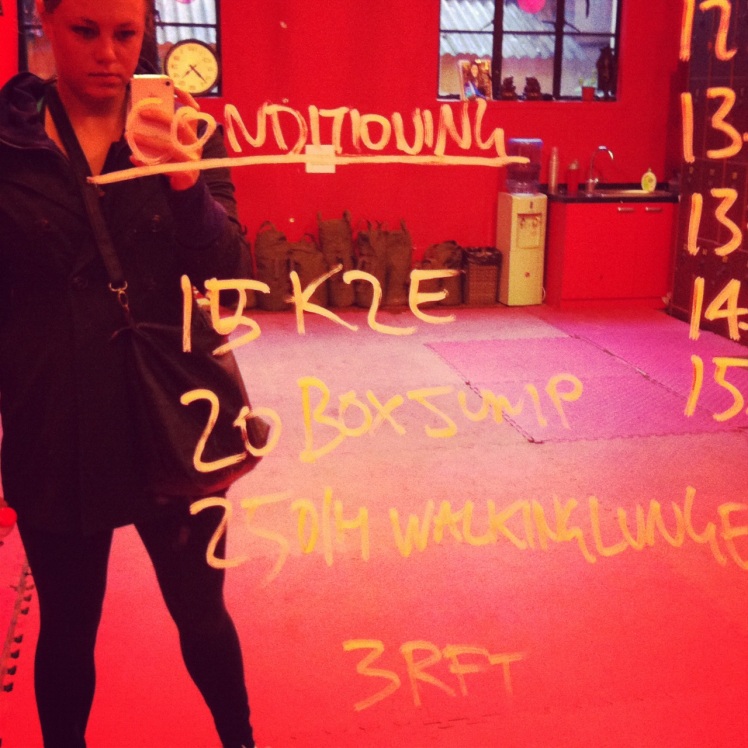 My time was 12.40 and I used a big box for all the jumps! Also, the knees to elbows were so much easier than the first time I did them. Core is getting stronger!  However my quads were still crazy sore and my foot started aching during the box jumps. Boo. I worked up a great sweat though and was warm for the entire trip home.

There was little time to waste though because we had tickets to Shanghai Circus World!!! We only recently heard about this acrobatic show that plays every day in the Zhabei District. We easily took the metro to the Shanghai Circus World stop and barely made it on time to meet our friends.

The show was incredible! Think Cirque Soleil with a Chinese twist and shaky safety precautions. There were girls flipping around on bicycles, men juggling porcelain jars, acrobats catapulting people from giant seesaws onto platforms, and men running on a stories high rotating wheel without any safety harness while occasionally blindfolded! The craziest stunt was when they fit 8 roaring motorcyclists in a metal cage ball. How they did not crash into each other is beyond me.

The show was just phenomenal and I highly recommend it if you are visiting Shanghai!

Afterwards we went to City Bull bar on Hong Mei Lu Pedestrian Street for a big joint birthday party. There were nachos plates, too many shots, and some karaoke with people ripping open Peter’s snap button shirt again and again. Happy Birthday?

It was a long but fun day and I know Peter enjoyed it! Happy Birthday baby!

It was a rough morning to say the least. To spare you from my ragged appearance, here is my leaf face.

Much prettier don’t you think? I LOVE FALL!

I don’t remember what we did but I am sure it consisted of chugging water, watching movies, and a dumpling dinner down the street. We are so predictable.

One thought on “Day 321 and 322: A Spectacular Birthday Weekend”