Just two days after my first scuba diving experience, we were back at the Leisure Dive Center ready for another day out under the water. I told you we couldn’t stay away.

Sadly our instructor Jens went back to Sweden the day before so we paired up with John, an equally capable and cool French instructor. We boarded the boat at 10am and began the slow slog towards new dive sites. We were blessed with a beautiful clear day and calm seas unlike our first day of diving. While reviewing the basic instructions and hand-signals with John, I felt much more calm and relaxed. I was now a diving pro!

Our first dive site was Viking on the north east side of Phi Phi Leh island. We quickly put on all of our gear and hopped into the water close to a small inlet where a few boats were anchored. This time I did not slip clumsily into the water like last time but only because the captain of the boat gave me a s0lid push forward. Thanks captain. 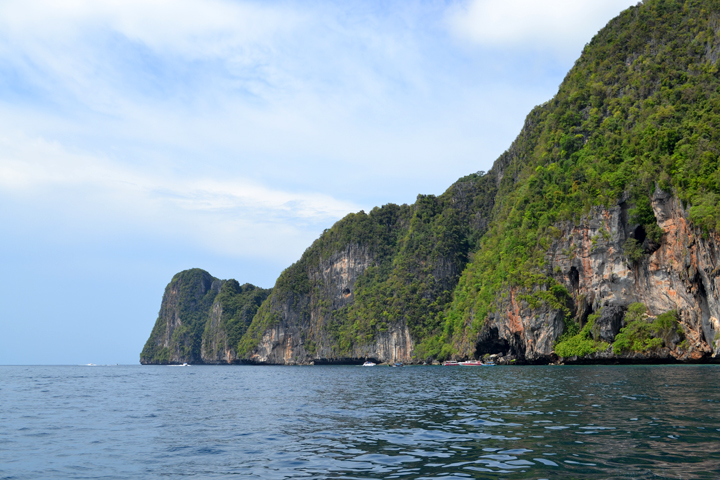 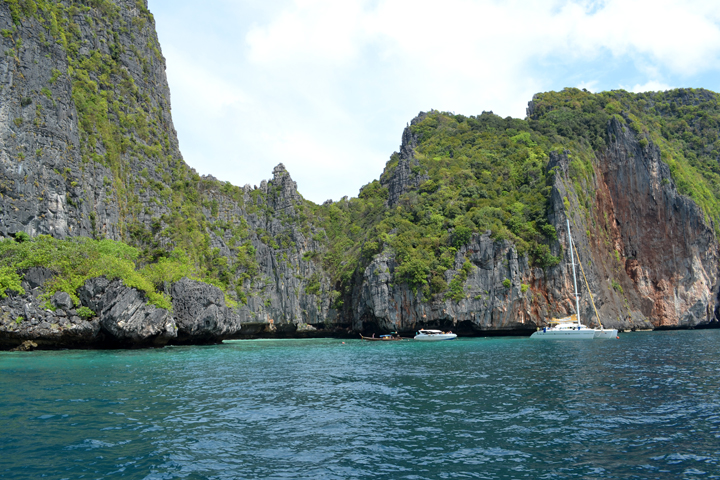 Even though I sank to the bottom like a rock at the beginning (whoops!), the rest of the dive was incredible. We descended next to a shallow bay and began by exploring a concrete artificial reef teeming with large schools of fish. The best part were these enormous batfish that loved swimming above in our bubbles! After swimming along a long sandy stretch we came upon a shallow reef covered in fans and corals. We saw several eels and too many cute little clownfish in their anemone homes. I could watch those little guys all day! They are definitely my favorite fish.

The dive lasted an entire hour which was awesome since our first two dives were only 45 minutes or so. This time Peter wasted much less oxygen in his tank after I talked to him about slowing down his breathing and focusing on longer exhales. Thank you yoga!

Once we got back on the boat we enjoyed lunch in the same location of the first dive. I devoured some delicious chicken Pad Thai while Peter ate a tuna sandwich (how could you not have Thai food in Thailand??? crazy.. ). We then  jumped into the crystal clear water and swam around. Usually I get scared swimming in the ocean but since I already knew what was in the depths below I was totally calm. 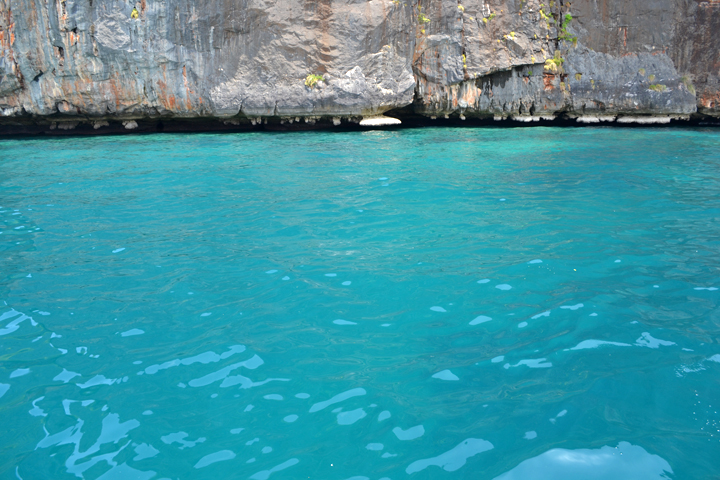 After lunch we set off along Phi Phi Leh towards our next dive site, Phi Leh Wall. We passed the Viking Cave, which is full of bird’s nests that are harvested for bird’s nest soup, a delicacy in Chinese cuisine. So bizarre right?? After some quick research I found that edible bird’s nest are among the most expensive foods on the planet and are made from the saliva of cave-dwelling birds called swiftlets. Apparently these bird spit nests have extraordinary nutritional and medicinal properties, according to TCM. I do not doubt the health claims of this bizarre food but I have no interest in eating bird’s nest soup (or chicken feet or stinky tofu). If you have ever tried it, let me know!

Shortly we arrived at Phi Leh Lagoon and got suited up for our second and final dive of the day. The lagoon was just as beautiful as Maya Beach on the other side of Phi Phi Leh Island but much less crowded. Although I was excited to dive again, my neck began to feel stiff and painful to move. However it wasn’t too debilitating and I was determined to enjoy my last dive of the trip.

A nice Russian girl on our boat offered to take pictures of us suiting up for which I was very grateful. Her boyfriend is actually from St. Petersburg, Russia! We had a laugh realizing that we were all from St. Petersburg but from different countries! Crazy.

After John helped us suit up into our extremely heavy gear, he jumped in the water first. Then it was my turn! You can kind of tell in the pictures but I was seriously struggling with standing up under all that weight! This is coming from a weight lifter too! I also was scared that I would slip and fall again. Plus, I managed to rip my wetsuit which was really unfortunate but kind of hilarious. But I think I look pretty awesome in a short orange wetsuit. Don’t you agree? 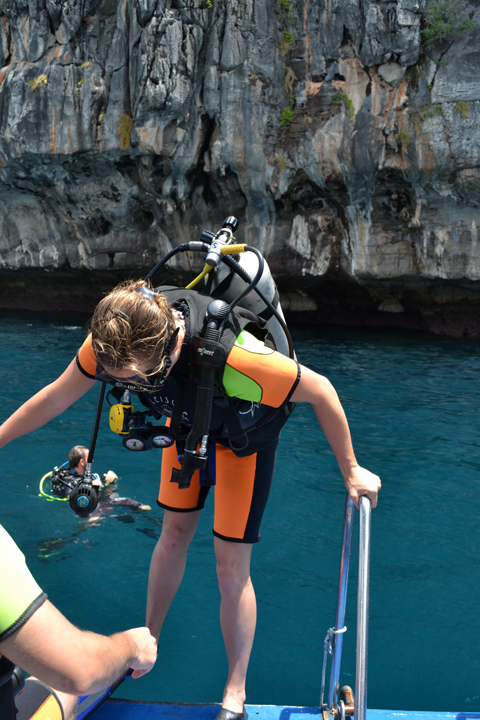 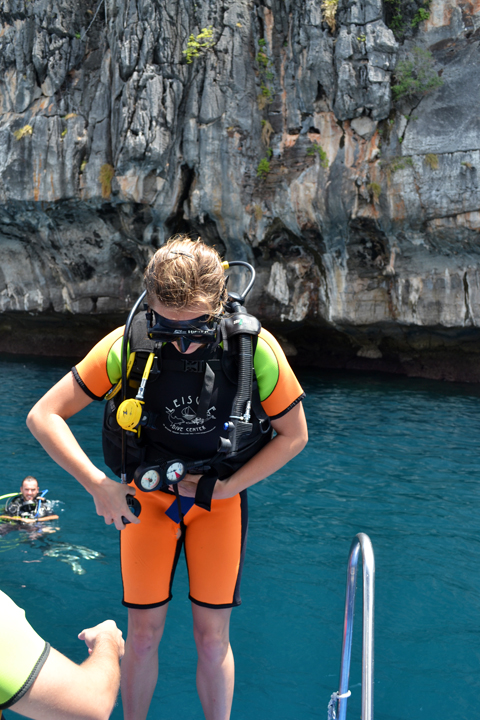 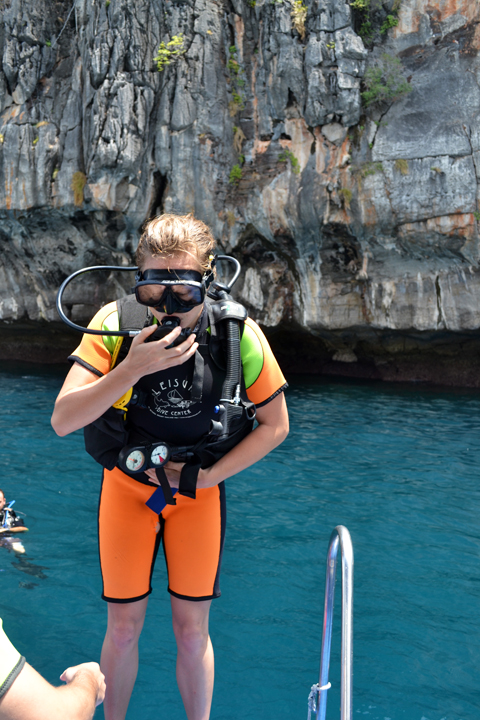 Because of my issues with properly jumping into the water, John suggested we try falling backwards instead. I also got some help from my jumping buddy, the captain of the boat. He really gave me a big push! Hahaha. 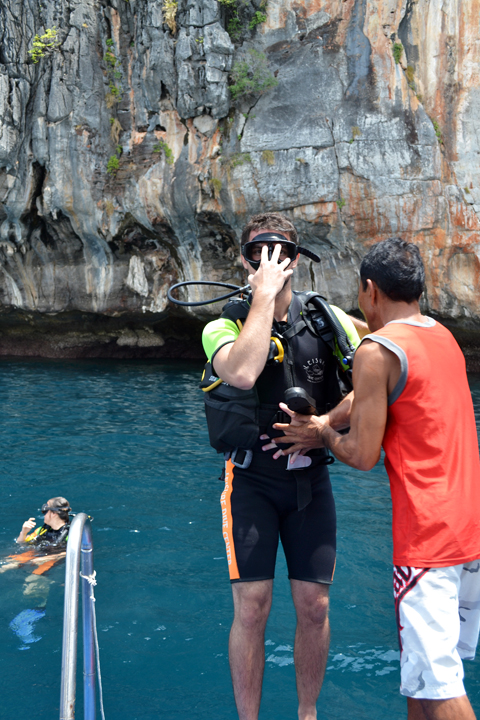 Once we were all settled nicely in the water we began our descent next to the Phi Leh Wall. We leveled out at about 11 meters and started swimming slowly along the wall which was covered in corals and sponges. We didn’t see as much sea life like in our previous dives so I focused on enjoying the feeling of swimming slowly in an ocean of quiet.

An hour later, it was time to come back up. As we broke the surface, I was relieved and sad at the same time. Although I was happy to breathe normally again, I was sad that our diving experience was over. Before this trip to the Phi Phi Islands I would have NEVER considered scuba diving. My fear of the ocean, drowning and small spaces convinced me that scuba diving was just not for me.

I was so wrong. Scuba diving is absolutely perfect for me.

It is an activity that hovers on the edge of fears and my desires. While it amazing to witness the vibrant world of ocean life, I desire the incredible calm and quiet of diving most of all. Diving is an extreme form of meditation that brings a sense of ultimate peace and serenity. As you drift along effortlessly and weightlessly, you are forced to breath slowly and deeply and to draw your attention both into and out of your body. It is a transcendent experience that I have always been drawn to. My childhood days of literally sitting at the bottom of a pool for as long as possible now has a name and purpose.

I do not know when I will have the opportunity to scuba dive again but I know that I will jump (hopefully more gracefully this time) at the chance to do it again. Why? Because diving rocks! 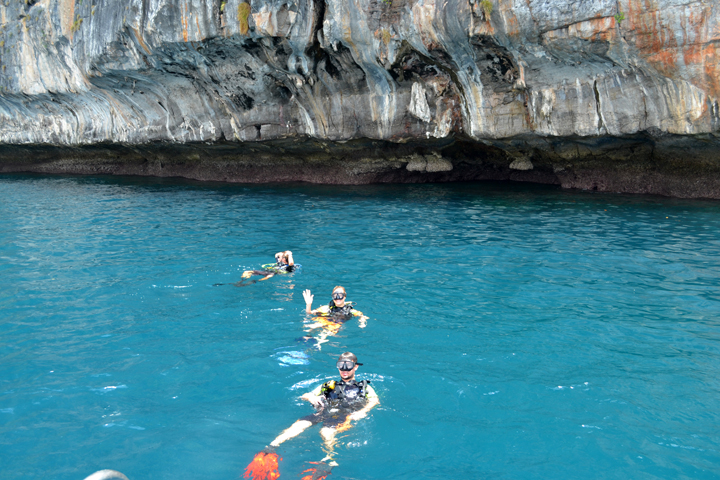 We are also grateful for the wonderful instructors at Leisure Dive Center. They were patient, kind, and so knowledgable. I would not have enjoyed diving so much if it were not for them! If you ever go to the Phi Phi Islands, make sure you sign up for their half-day diving trips! It was truly an experience of a lifetime.

Next up will be the final post on our Phi Phi Islands adventure. Stay tuned!