It seems cruel to blog about Ireland when I am stuck in the humid hotbox that is Shanghai right now. But maybe this will help me get through this heatwave for now… Let’s get back to Eurotrip 2014 shall we?

After we left Bridget’s Well, we were finally headed to the Cliffs of Moher! Pictures of these stunning cliffs had been pinned to my Pinterest travel board for quite some time and I was so excited to visit them in person. However my dreams of isolated cliffs dropping off into the sea were ruined once we pulled into the busy parking lot. The tourism center and walkways to the Cliffs were absolutely swarming with people. Well that was not quite the isolated experience of natural beauty in Ireland that I had envisioned. But it would have to do. 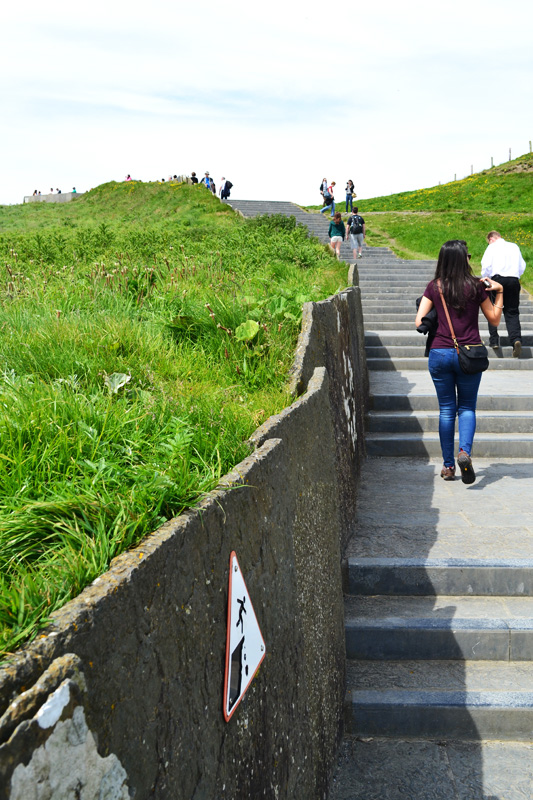 As we veered off towards the right, I was determined to accept the experience for what it was and enjoy it despite the crowds. And the Cliffs of Moher really are a spectacular sight to behold. As we climbed the steps safely enclosed by a stone wall, we could see the the opposite wall of the cliffs and the people, appearing like marching ants, walking dangerously close to the edge. It was a bizarre feeling as if what you are seeing is oddly small and yet larger than life at the same time. My brain just had no way to conceptualize the scale of the view before me. 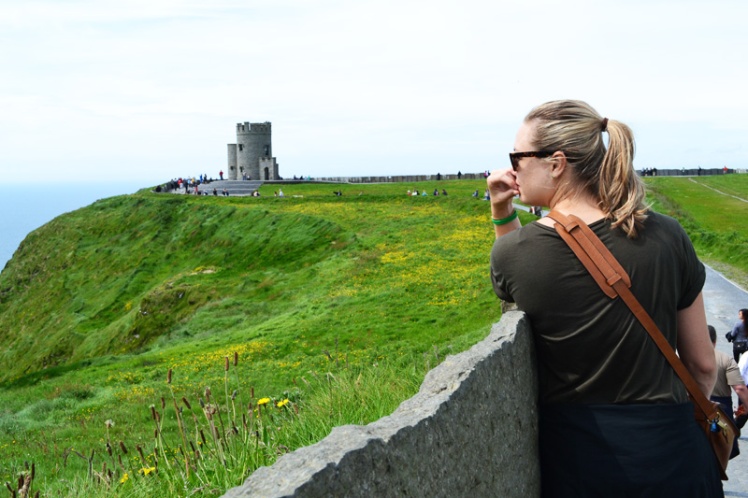 As we walked up towards O’Brien’s Tower, we veered off to the right and towards the unofficial path along the absolute edge of the world. Leaving the marked tourist area, we joined other brave souls through the fence and along private farmland full of grazing sheep and cattle. We were entering uncharted territory and I was equally thrilled and terrified, not a huge fan of heights myself. 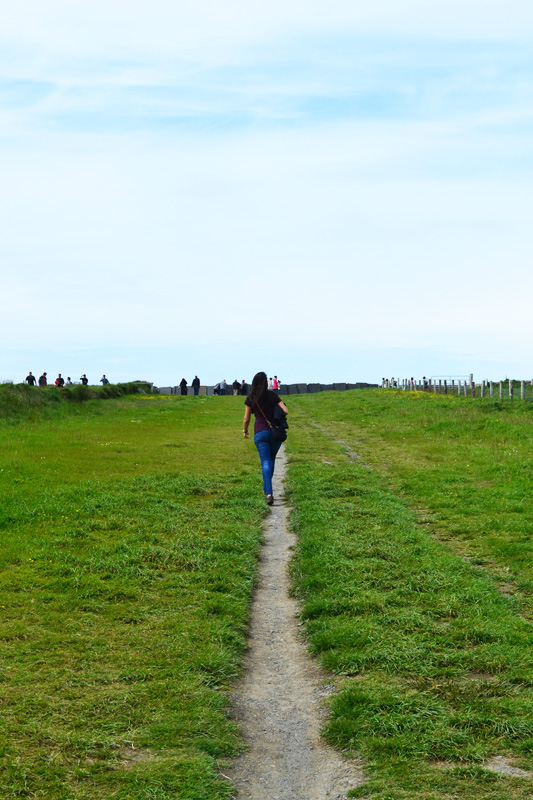 We found ourselves on packed dirt path through the grass with a fence (and sheep) to our right, and a straight drop down into nothingness to our left. I could feel my throat constricting and my heart beating furiously as we danced along the edge, pushed forward by the people behind us. Every time we encountered people walking in the opposite direction, I would step to the side away from the edge, my palms sweating and face scrunched in concentration. Why was nobody fazed?? 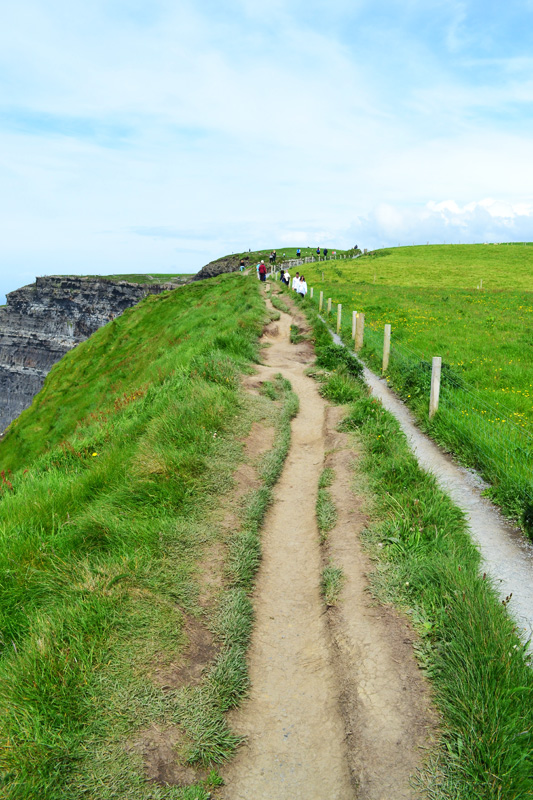 Carina did not share my fears and would take off down the side of the cliff to gaze out over the edge at small lookout points along the way. More often than not I found myself calling out “Be careful!” and “oh my god” while she just smiled serenely, perched on the edge like a watchful bird. This is why we are friends.

Eventually she persuaded me to come closer, resulting in this photo of me obviously standing several feet away from the edge. Believe me, this was close enough! 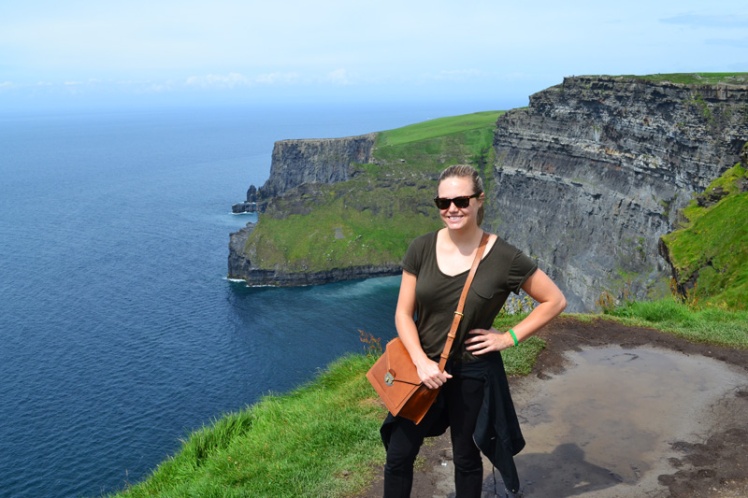 We spent a lot of time just sitting in the grass, admiring the cliffs and the delightfully clear green water below. A few times we pointed out some truly idiotic people SITTING WITH THEIR FEET DANGLING OFF THE EDGE. ARE YOU INSANE. They probably were, seeing as these are also the Cliffs of Insanity, yes those same cliffs from The Princess Bride. Cool yeah?? As you wish. 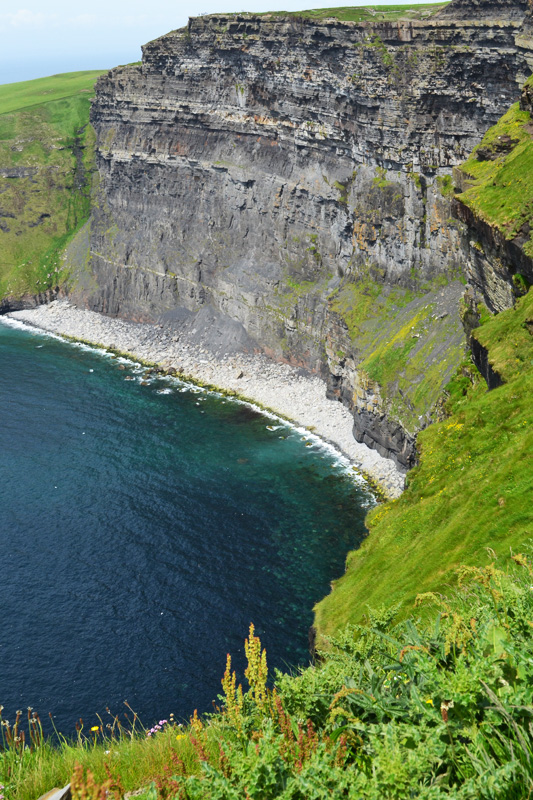 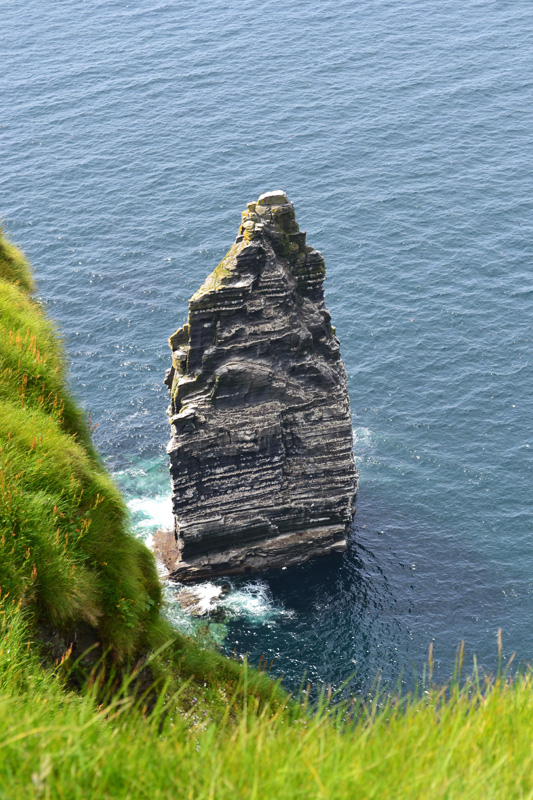 Oh hey we look so happy. I am smiling because we are standing very far away from the edge at my request. Thanks Carina! 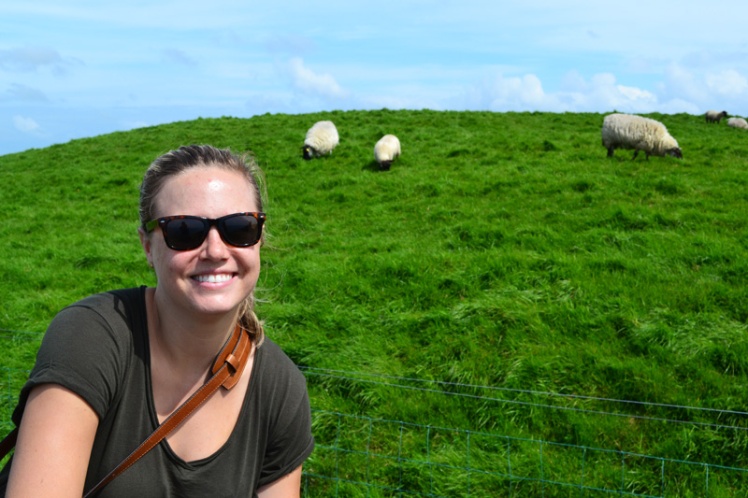 After an hour or so we left the unofficial Cliffs of Moher walk along the edge of the world and walked back to the bus. And that was that! I guess I can cross the Cliffs of Moher off my Pinterest board. It was not really what I was expecting but I enjoyed the experience anyways. The Cliffs really are spectacular.

The Burren- or lunar landscape

Once we left the Cliffs of Moher, it was time to drive to Galway for the night. But first we had to make a quick stop at the Burren, a karst landscape of limestone known for its geological and ecological diversity. It is also thought to resemble a lunar landscape. 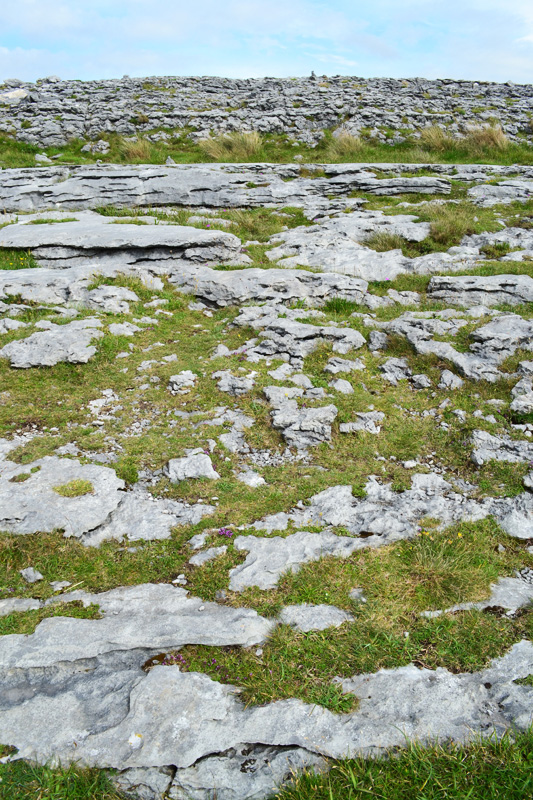 We looked around for about 10 minutes, observing the rock formations with interest before plopping down to rest. It had been a long day.

But we were excited! Why?? Because we were headed to Galway, home to the best traditional Irish music and musicians in Ireland! I was ecstatic! Bring on the music!

Night out in Galway

When we arrived in Galway we settle into the Kilarney Hostel and headed to Kinsghead for dinner with our roommates. By the time we left dinner around 10pm it was STILL LIGHT OUTSIDE. It was absolutely amazing. We walked to the river, apparently the fastest and shortest river in Ireland, and then walked back to the pub street in search of live music. 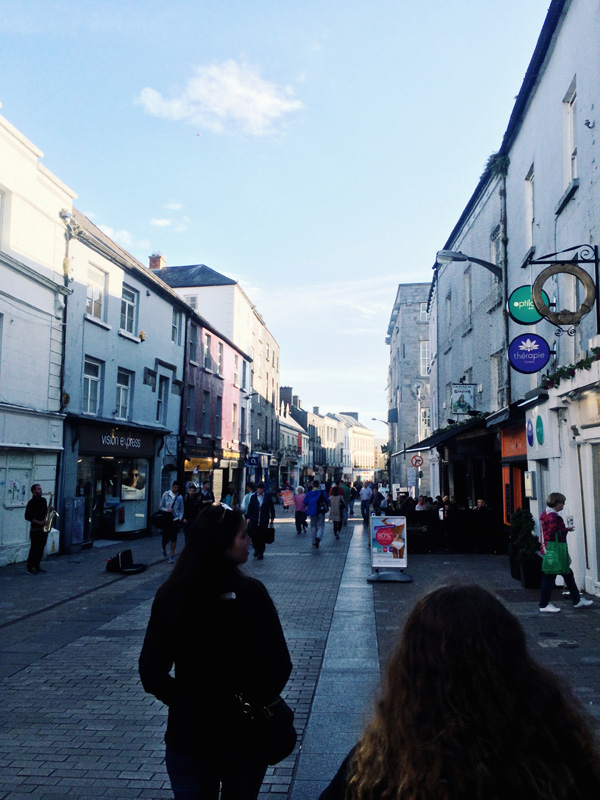 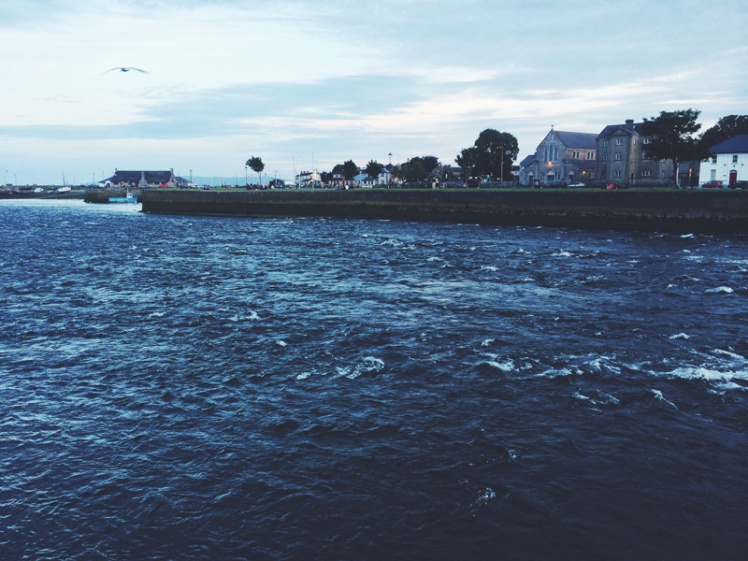 We ended up back at Kingshead and had a few pints while watching an amazing performance by a group of four lads. They were absolutely incredible musicians and I was mesmerized for hours. They played mostly traditional Irish tunes except for this amazing rendition of a few U2 songs and “Rock Me Mama”. Oh god I love that song (typical). I also loved the musician second on the left who was playing this tiny little accordion. He barely moved his body while his hands and fingers moved insanely fast to play the harmony with the actual accordion. It was fantastic. I had a permanent smile on my face and could not stop my feet from moving to the beat. I love this music!

Oh and they had Irish dancers too. Riverdance I guess you could call it. It was epic.

But the best was yet to come. Tomorrow would end up being my favorite day in Ireland and another amazing night out in Galway. Stay tuned.

Catching up? Don’t miss any posts from Eurotrip 2014.
Ireland Day 1: Somewhere over the rainbow in Dublin
Ireland Day 2: Shamrocker Irish Adventures from Dublin to County Clare

16 thoughts on “Ireland Day 2 continued: On the edge at the Cliffs of Moher, the Burren, and a Night in Galway”