Well we are leaving for a cruise to Japan and South Korea in a few hours for Chinese national holiday so here is the final London post! 🙂

After failing to visit the Tower of London the first time when my neck seized up, we were determined to go on our last day! For the longest time I thought the Tower of London was literally a big tower where they kept prisoners. But oh boy was I wrong. Let’s take a look!

First we walked up the walkway along the stone gates, visiting various dungeons along the way and learning about its famous prisoners. It was eerie to see the messages scratched into the wall by prisoners years and years ago. It must have sucked to be locked up in a cold stone room like that. Eek. 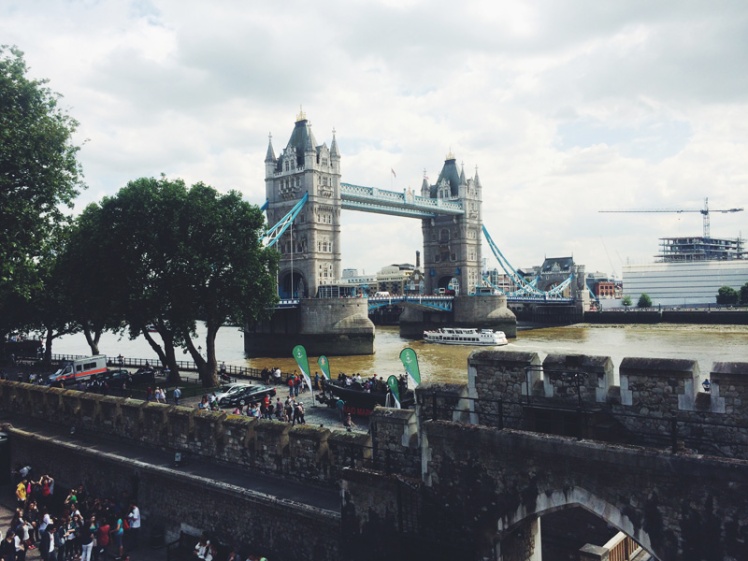 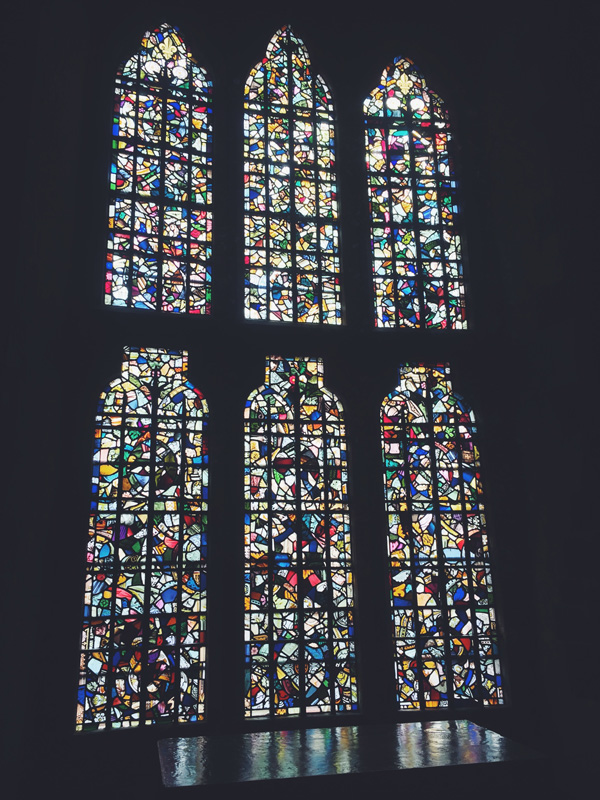 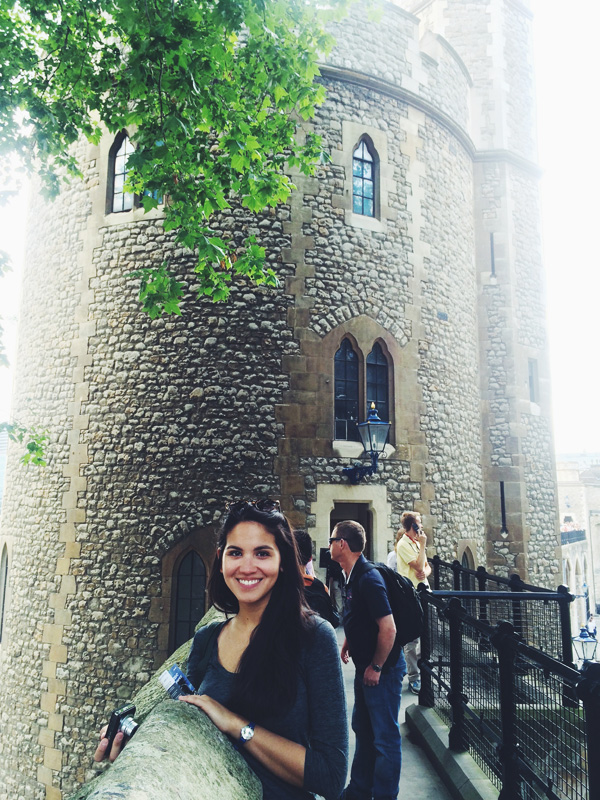 We went into the White Tower which was the strongest structure in the medieval castle. Up each floor we followed the well-designed museum through places like the armory, lodgings for the lords, and chapel. It was a really awesome display and was well worth the high entrance fee to the Tower. 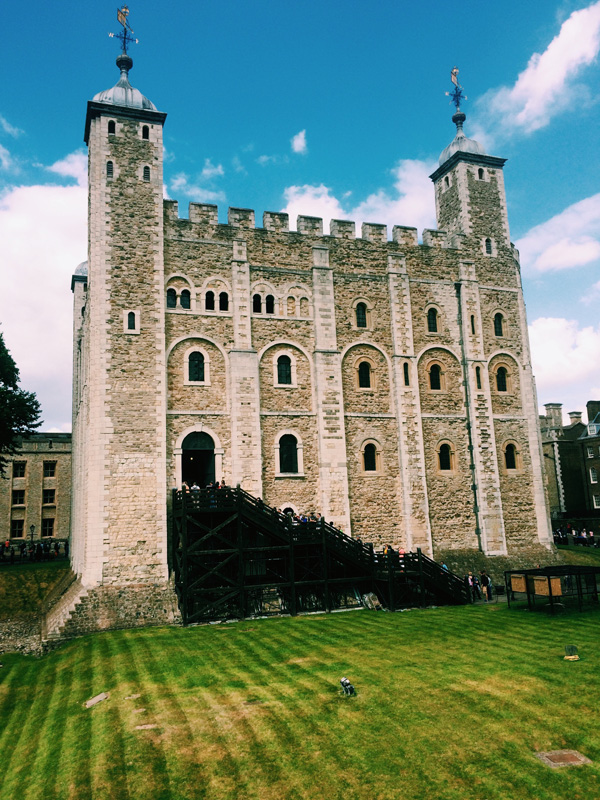 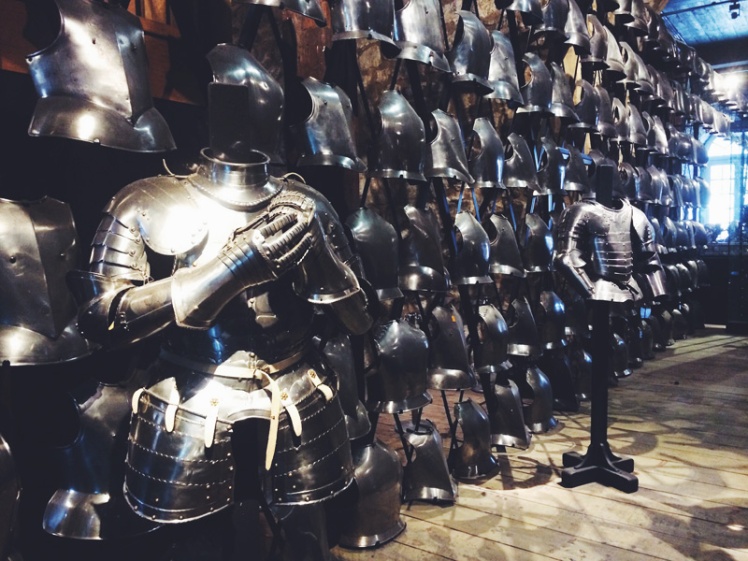 Then it was time to visit the dungeons!! The line to enter was long and we were excited…. until we walked inside. The “dungeon” was literally a single room with one torture device on display. We almost walked out on accident, thinking there was more! Oh well.

But we saw a polar bear and were appeased. Bowdoin represent! 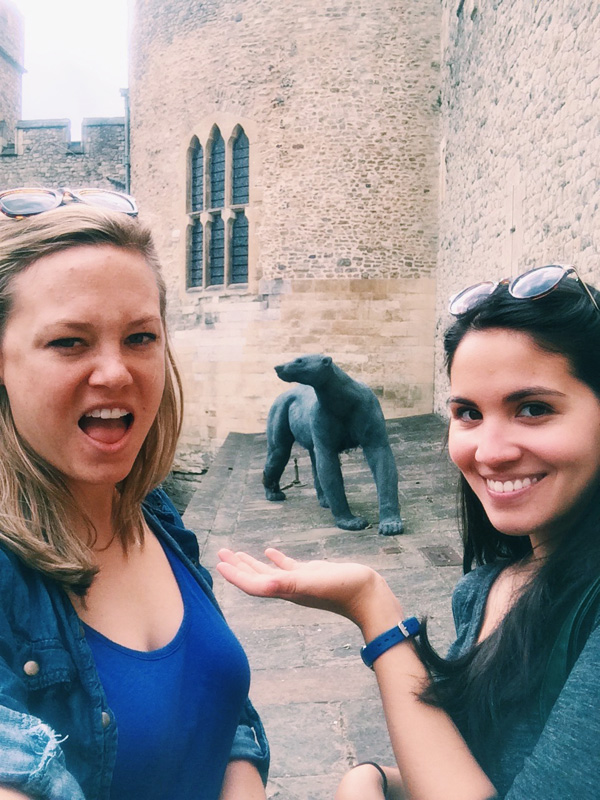 Some “well-equipped” armor made us giggle because we are children. 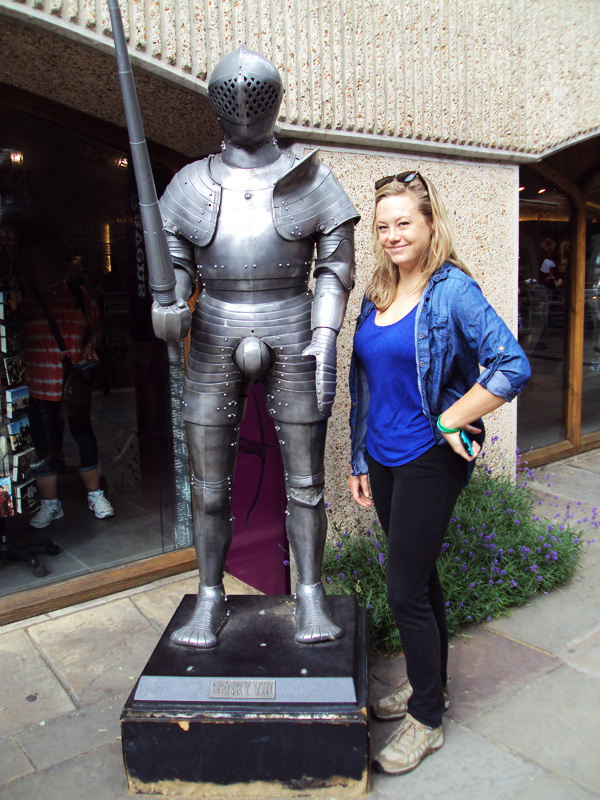 And then we waited in line with a large tour group of Japenese tourists to see the crown jewels. Even though they filter you through quite quickly, the whole display was great and the jewels were just unreal. 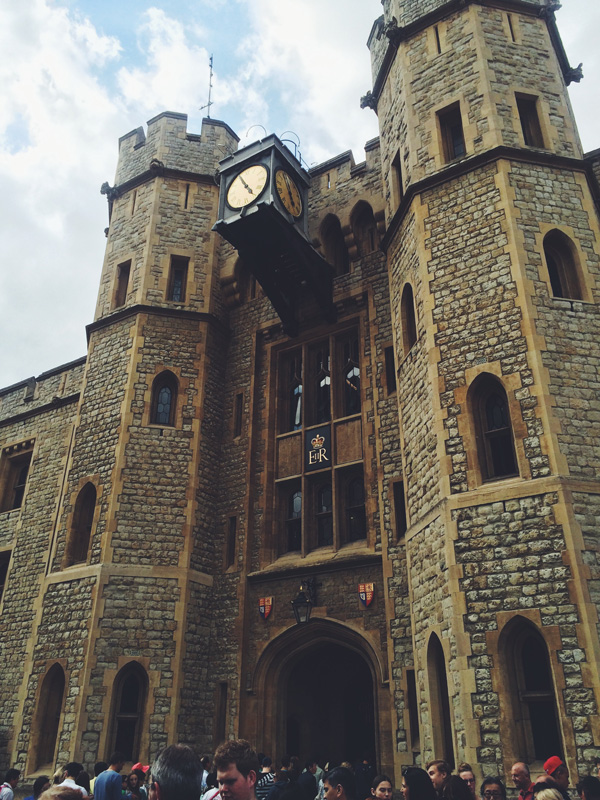 We left the Tower of London and headed straight for Tower Bridge to cross the River Thames. 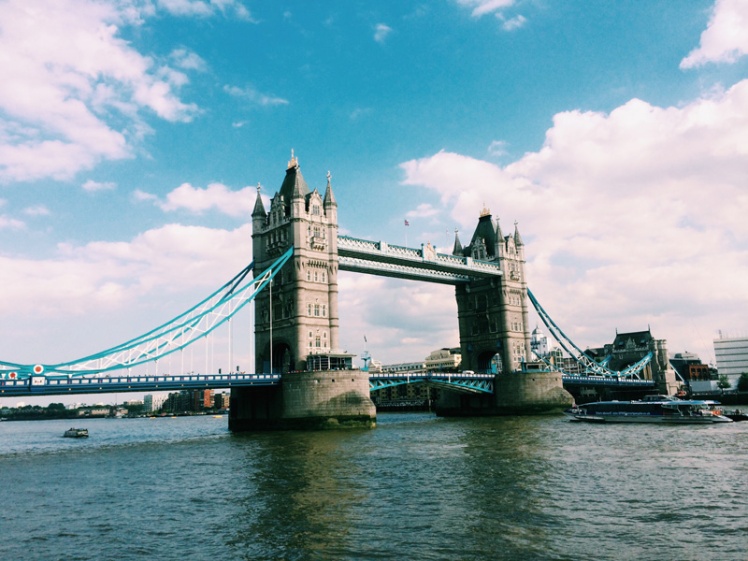 We were on a mission to find some refreshments at Borough Market, one of the oldest markets in London. It is located under an overpass, making it feel like you are underground. 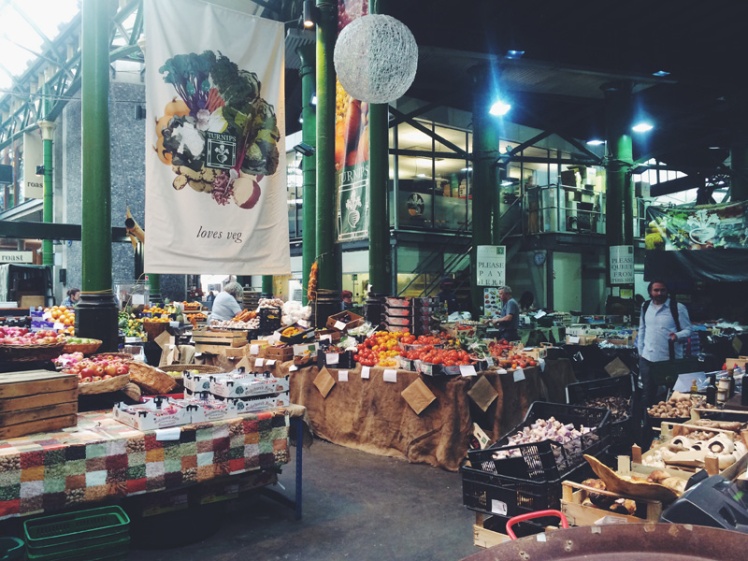 Unfortunately the market had just closed, so we got some gelato the size of my head to make ourselves feel better. It worked. 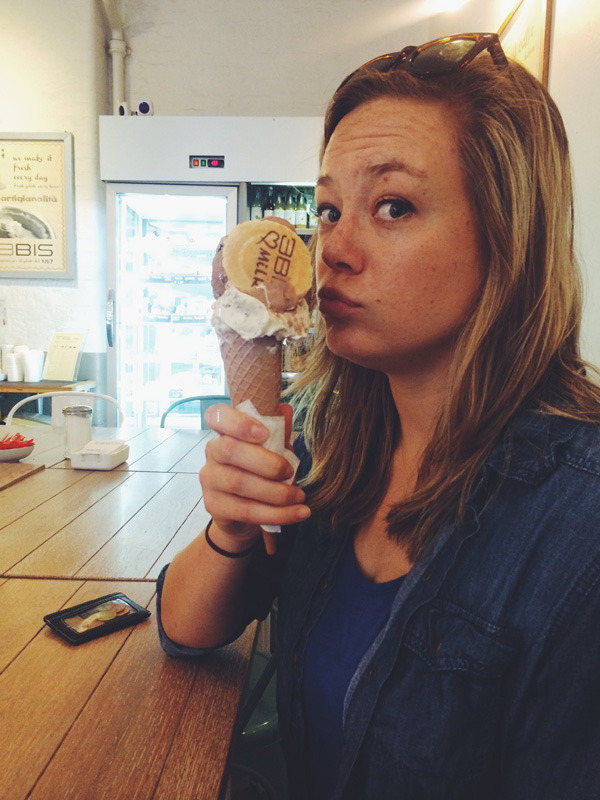 Then we walked on to the Tate Gallery, which definitely looks as modern as the art it houses. The museum was absolutely enormous on the inside and we saw a few cool displays. However, I was exhausted and more than ready to sit down for a while. 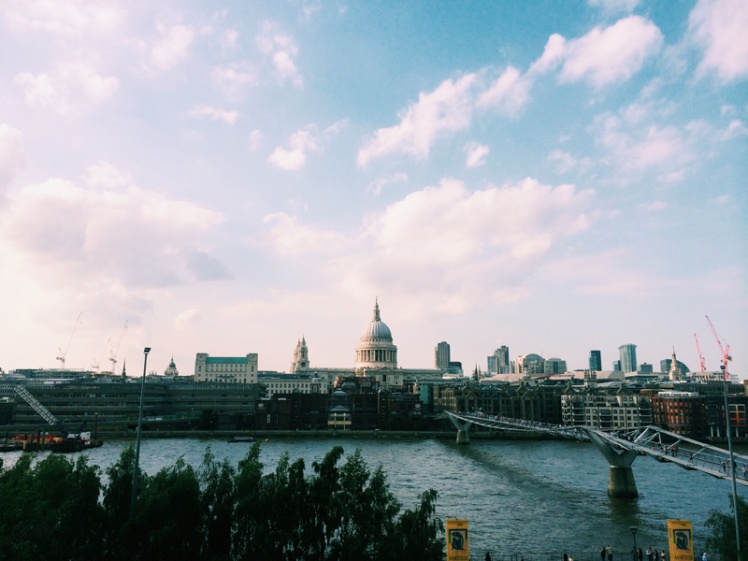 Once we left the museum we sat by the water to chill for a while before making our way over Millennium Bridge. It was the perfect time of day as the remaining light shown down on St. Peter’s and the London skyline. 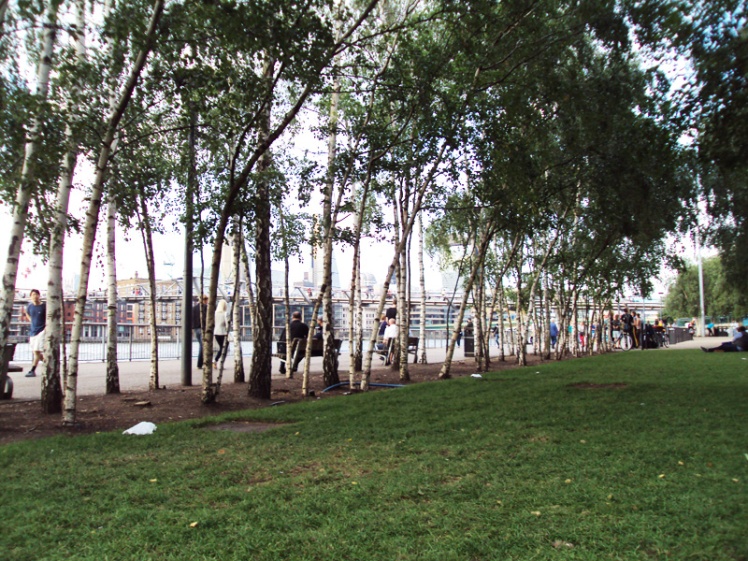 Finally we took the tube back to the flat and met up with Val and her friends at Street Feast! Street Feast is a cool outdoor area that fills with permanent food vendors on the weekends, selling everything from BBQ to Thai food. I had the shrimp and grits which were DIVINE. It was a really cool atmosphere and we enjoyed a few drinks with all our new friends.

Later that evening we went out to a weird reggae bar called Passing Clouds where we danced to a hiphop latin fusion band. We ended up back at a friend’s apartment under the bright moon and watched the sunrise on her rooftop patio. It was the perfect end to a wonderful time in London.

Thank you Val for being an amazing host! We had the best time! 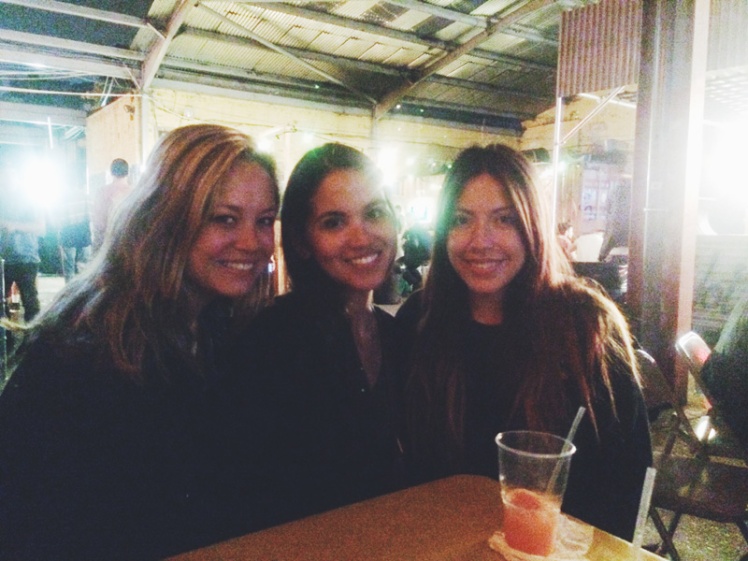 Sadly, it was time to catch a train to Southend Airport and head to the final country on our Eurotrip 2014…